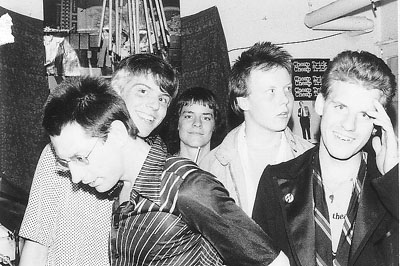 These are the digitizing notes I wrote when I digitized this recording in 2007:
This was the first time I ever saw AMC. I managed a convenience store next door to Garage D’Or, and this just happened to coincide with my break one afternoon. I dropped by to shoot the breeze with the fellows at the shop, and walked in on this scruffy looking bunch playing an acoustic set; needless to say, I was hooked.

The manager of the store [Terry Katzman] loaned me a cassette he made of the in-store, and I believe he was using a Sony D-6, with a 909-A mic, which was a fairly common rig in those days, at any rate. I edited out some of the ambient sounds of talkative customers and street noises in between the songs, and created fades at the time I made my copy from the master. You can still hear a few buses passing as the front door opens periodically throughout the set, but I think overall this ends up being a slightly gentler version for the edits. The Azimuth optimization was a delicate operation when making this analog/digital transfer, as this was now the third tape head employed along the way; I ended up re-adjusting it a few times before I was satisfied. Anyway, it’s what I have, so enjoy!

Here are a few more notes / afterthoughts, added in 2021:
I had previously listed this as my own recording, but I had apparently mixed up the date with another in-store set from Garage D’Or, and it took a while to get all of this in one place so I could sort things out properly. This fileset was created in 2007, from a copy of Terry’s tape. During the transfer process, I made the decision to edit the songs with gentle fade-in / fade-outs, to soften some of the ambient traffic sounds, audience chatter, etc, that occasionally invited themselves into random places. All said, I think it sounds better than I remembered for the most part, but I hadn’t started making 24-bit transfers at the time, so this transfer is permanently in 16/44.1. If Terry’s original tape still exists, it could serve as a better master source recording.

Here’s the technical breakdown for the recording itself: