Initially christened Somebody’s Got An Axe To Grind, this band took forever to get on its’ feet, and in true rock’n’roll fashion, died almost as soon as it got there. 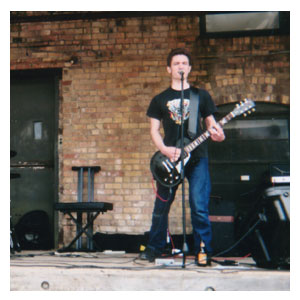 Jesse Boldt, former lead vocalist of St. Paul horror-punk band Invasion Earth, had written a bunch of new songs and wanted to start a new band. I had been playing harmonica in a couple of bands – The Pushrods and Panel Of Experts – and right about the time I thought I’d be able to work on some material with Jesse, I got a job offer in Alaska, of all places; and it seemed like my so-called music career was going to take an indefinite hiatus.

After working as a computer geek in Alaska for a while, I returned to the mainland and found the dynamics of my lifestyle had changed considerably. I was now a single man, and had to find a new home. Settling into a rented space in St. Paul, and on an income that could actually afford the amenities a band required, I bought a new P.A., a new amp, got my effects pedals repaired, and set about learning a batch of songs.

Jesse had tried working with a few folks while I was away, but for one reason or another, it just didn’t work out. I had time and energy to spare, so we got to work. A number of early morning coffee-fueled practice sessions passed, and we had been unable to find either a bass player or a drummer, so we relied on the old standby: a drum machine.

Some might consider that a less than ideal situation perhaps, but as they say, a drum machine wouldn’t drink all our beer, or try to sleep with your girlfriend. Besides, it provided just enough glue to make us sound pretty tight, and in no time at all, I had recorded a fairly decent-sounding demo, and we had even started playing out in local clubs. Learning these songs had helped me develop my guitar-playing abilities, and in turn, I was able to help develop the songs into something more as well.

Unfortunately, we had different opinions about the sound we were making. To my ears, the two-piece band had a pretty tough sound, but Jesse wasn’t convinced the two-man band was a viable format, and wanted to work with a more conventional band line-up. Ultimately, I guess that falls under the age-old reason for splitting up a band: artistic differences.

It’s not that I had no interest in the possibility of morphing into a full-fledged band – but I didn’t see any need to be in a hurry about it, and thought if we held out for a while, the right people would happen along. I also thought that if enough people heard the demo, and saw us play the songs live, someone might be interested enough to approach us about playing together. Meanwhile, I figured we were following a tradition upheld by a number of bands before us: considering the number of bands from The Three Johns to Echo & The Bunnymen to Big Black, who had all worked with a stripped-down line-up and a drum machine. All in all, my speculation was that an expanded line-up should be an option, rather than a necessity. Being as there were only two of us, there wasn’t going to be a majority vote, so I decided to leave. Hey, there’s politics involved in everything – even being in a band.

Before we went our separate ways, I had given out probably something like 200 of our demo CDs, and they got a pretty favorable response, including some offers for a few gigs. Jesse and a few pals re-worked some of these songs, and with the addition of some new material, formed 30 Second Crash, and recorded a full-length CD on Trouser Trax Records. Meanwhile, this was kind of the prototype for the new formation. In the years that followed, Jesse would join forces with Pair Of Sevens and Ancient Altars.

I still enjoy listening to these songs, as much as I enjoyed playing them at the time. Unfortunately, a hard drive crash wiped out a couple of the last tracks we ever recorded – including killer versions of “Ejection” [Hawkwind], and “Moonage Daydream” [David Bowie]. I might still have a couple of other tracks to post here in the future, after I dig through a few boxes of the old home recordings. In the meanwhile, here’s what you get – hope you can dig it.

Demolition Factor Gemet Gemet Somebody’s Got An Axe To Grind